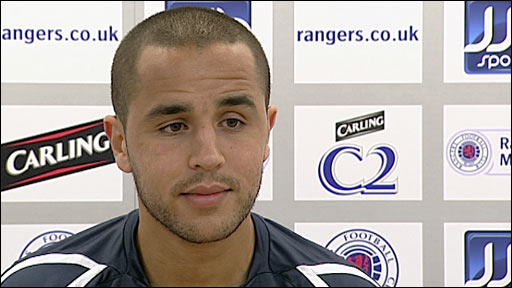 Algerian ace Bougherra has revealed he would jump at the chance to land a big-money move down south. And Papac looks set to leave on a Bosman as Gers have yet to open talks with the Bosnian about a new contract.

Bougherra has been linked with a move away from Ibrox for the last two years and earned plenty of admirers with his displays at the World Cup.

The 28-year-old had a taste of Premiership football with Charlton before his move to Ibrox and is hankering for a return to England.

He said: "I've been at Rangers for three years and owe them a lot. "I've been lucky enough to play in the Champions League and have progressed as a player. But I still have room for improvement.

"If another club can offer me a challenge - and Rangers agree to sell - I will go there. My aim is the Premiership.

"If an opportunity comes up I will seize it if it is a good club."

Bougherra also refused to rule out moving overseas and claimed he is fed up with scrapping for points in the stale SPL.

He said: "Would I like to play in another league such as Italy? I'll keep an open mind.

"If a club offers me the challenge of going for the Champions League or Europa League then why not?

"But I no longer pay attention to transfer rumours as people have been saying things for two years.

"In the SPL you have to play teams four times a season and that's a pity. It's hard to put up with.

"I defy anybody to come and play here. In terms of technique and tactics, Scotland is not the same as France or Spain.

"However, it is tough physically. Put a skilful player into a typical Scottish match and he won't be able to do anything.

"When you play for Rangers every other team gives 200 per cent against you. They want to make their names by beating you."

Although Bougherra is keen to further his career, he won't kick up a fuss if an English giant fails to move for him in January.

Rangers have a Europa League campaign to look forward to and the Algerian said: "We reached the final three years ago but this will be my first time in the competition.

"Let's try to go as far as we can. It remains a possibility.

"I won't have any concerns if I'm still at Rangers when the Europa League restarts. I love the club.

"I am still at Ibrox and we will see what fate has in store. But if I am to leave I will leave."

Left-back Papac has been one of Rangers' most consistent performers over the past few seasons. But his contract runs out at the end of this campaign and the 30-year-old will be free to speak to clubs next month.

So Papac is considering hiring an agent to help broker a move away from Ibrox if he isn't offered a new deal soon.

When asked about Papac's situation on December 14, chief executive Martin Bain said: "I am definitely going to sit down with him in the next week or 10 days."

Steven Naismith put pen to paper on a new long-term contract last week but Papac has yet to be offered fresh terms.

The Bosnian, who joined up from Austria Vienna in 2006, said: "I don't have an offer on the table.

"Martin said the club wanted to speak to me about a new contract and I told him, 'I'm here.' But that's as far as it has gone.

"I don't know when we will speak. I've always said Rangers must have the first option but you never know what will happen.

"If it comes to January then I must think about my future.

"It's getting close to the end of my contract and I have to consider everything. I don't have an agent and do all the negotiations myself.

"But I must think about this option when the new year comes. If I agree a deal with Rangers then I won't need an agent but I might need one for something else."

Assistant manager Ally McCoist is set to take the reins at Ibrox when Walter Smith retires in May.

He believes it would be a huge blow to lose the likes of Papac.

McCoist said: "Sasa is definitely one I would be keen to keep.

"It would send out the right message to the fans. You want to keep your good players and, after seeing Naisy extend his contract, I would be thrilled if Sasa stayed.

"He is a manager's dream. Sasa is a great lad and can play left-back, left midfield and centre back.

"He is a good footballer and popular in the dressing-room.

"You can see the foreign aspect to his play in that he doesn't get involved in the hustle and bustle of Scottish football.

"Sasa rarely loses his composure. He will always take the ball and try to do the right thing with it.

"I'm involved in contract discussions and Walter is still heavily involved, believe me. He is the manager after all."