Algeria striker Karim Matmour has hailed the "unbelievable potential" of his side and revealed he is targeting three wins and progression from Group C at this summer's finals. 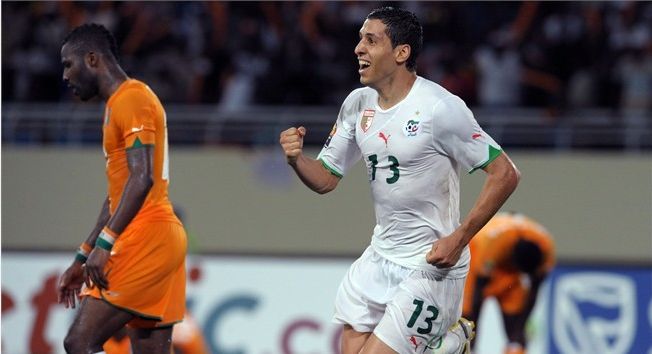 After beating bitter rivals Egypt in a play-off last November, the Desert Foxes are preparing for a first World Cup appearance since 1986 and are hoping to perform better than the team of 24 years ago, who finished bottom of a group containing Northern Ireland, Spain and Brazil.

Rabah Saadane's side struggled to make an impression at the African Nations Cup in January - labouring to the semi-finals before suffering an embarrassing 4-0 defeat to Egypt - but Matmour, who plays for Bundesliga side Borussia Monchengladbach, says Algeria should not be underestimated in South Africa.

"We mustn't go to South Africa without the belief that we're capable of upsetting the favourites," Matmour told FIFA.com. "We want to win as many of our games as we can, and we'll do whatever it takes.

"We're a young team, but we believe in our ability. The biggest disadvantage is our inexperience. The team has unbelievable potential, despite the lack of obvious star names.

"We want to win all our games. Personally, I always run out on to the field expecting to leave it as a winner. Our realistic target is a place in the Round of 16, which would be fantastic, although we've basically got to take it one step at a time."

It will be the third time that coach Saadane has led an Algeria team at the finals after guiding Les Fennecs to the 1982 and 1986 World Cups, and Matmour believes that his boss could hold the key to springing a shock in June.

"The coach, who led Algeria to the World Cup in 1982 and 1986, is a cool customer with tremendous expertise, and that's what he'll convey to the players," Matmour said.

"England are definitely favourites to win the group. Slovenia have qualified for the World Cup, so they have the class you need. I know about a handful of their players from the Bundesliga. But I do think we could spring a surprise."