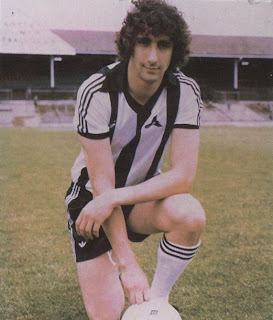 The number of Algerian players in the English game has steadily rose in the past few years with Algerian internationals Nadir Belhadj and Hameur Bouazza now regulars for their clubs Portsmouth and Charlton. Before that, there was Madjid Bougherra with Charlton, Yazid Mansouri with Coventry City, Ali Benarbia, Djamel Belmadi and Karim Kerkar with Manchester City, and finally Moussa Saib with Tottenham in the late 90's. However, one name that is rarely cited is that of Rachid Harkouk, the lanky London-born forward who was the pioneer of Algerian players in England.

Rash The Smash
Rachid Harkouk was born on May 19, 1956 in the Chelsea Borough of London, England, to an Algerian father and an English mother. Ironically, his career almost ended before it began at age 16 after he was turned down by Fulham in a trial match at Craven Cottage, despite scoring 5 goals and impressing everyone there. Harkouk quit playing and began working various odd jobs until he was spotted by a Sunday league coach kicking a ball around. In at age 17, he joined amateur-side Cherstey Town FC where he was paid £1.50 a week. Harkouk scored 15 goals in 40 games for the club as an 18-year old. The next season he followed his coach at Cherstey to Feltham FC, with the latter paying a massive ... £200 plus sell-on fee for the player. It took just one year at Feltham for Harkouk to move on to bigger things, as he was signed by future England manager Terry Venables at Crystal Palace, then playing in the third division.

In his first season at Selhurst Park, Harkouk finished as the team's top scorer in the league with 11 goals, with the most memorable coming in the final leauge game away against Wrexham with both sides fighting for promotion to the second division and Palace needing to win by 2 goals to have any chance for promotion. With the score 2-2 in the dying minutes, Harkouk scored and gave Palace the advantage, and his teammate Jeff Bourne scoring immediately after to give Palace the 4-2 victory, and more importantly promotion to the second division. In the 1977/1978 season, the 19-year old Harkouk scored 9 league goals and 3 FA Cup goals to again lead the team in scoring in all competitions and helping the team finish 9th in the league. He was nicknamed "Rash The Smash" for his ability to "smash" shots from long distance and impossible angles and was also called "The Spider" for the way he moved in and out position. Despite becoming a fan favourite for his goal scoring, endless energy and attachment to the club, he would leave the club on a low note, after being arrested by police for having possession of £250,000 in forged bills. In 1979, he left Crystal Palace to join second division side Queens Park Rangers for £100,000. He played just one season with QPR, scoring just 3 goals in 20 games before leaving to Notts County FC for £50,000.

Harkouk fit in perfectly at Notts County when he joined at the beginning of the 1980/1981 season, helping the team gain promotion to the English top flight in his first season. Notts County spent the next 3 seasons in the top flight where Harkouk scored 11 goals in total in a mostly substitute role. The club got relegated the next season, and again in the season after that. He would remain at the club until the end of the 1986 season, making a total of 144 apperances and scoring 40 goals.

In 1986, Algeria qualified for its second World Cup in a row and were drawn into the same group as Brazil, Spain and Northern Ireland for the Mondial in Mexico. Manager Rabah Saadane surprised many when he included Rachid Harkouk, who had just 1 cap at the time (against West Germany the year before), in his final list for the tournament, thus becoming the first English-born player to feature for an African team at the World Cup. Harkouk made 2 appearances at the World Cup, coming as substitute for the injured Rabah Madjer in the first game against Northern Ireland (1-1), and starting against Spain (0-3) in the final group game, where had a career ending injury. In total, Harkouk made 4 appearances for the Algerian National Team, failing to score a goal.

After his playing career, Harkouk retired to the village of Burton Joyce, just outside of Nottingham, where he currently operates a number of businesses.
by TonyStarks
Derniers articles